It's been a while since I last blogged, but there has been plenty of knitting going on. The Summer of Socks 2010 started on June 21st and I have joined in again this year. So far I have completed the Summer Soxs that I had started. The yarn is Skinny Bugga and is a dream to knit with. 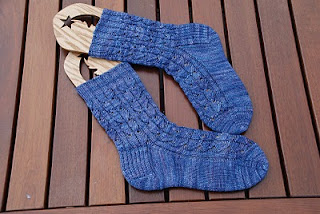 I did a test knit. I'd love to tell you all about this one, but I can't just yet. I'll tell you more about it once the pattern is published. I can tell you that I used Skinny Bugga for this one too. The color is Karner Blue, which may be my new favorite color! 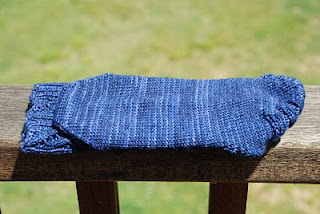 I also cast on Blackberry Brambles for the Socks That Rawk Quarter 3 KAL. I used my birthday yarn from my parents, which is STR mediumweight in Apple Valley Road. This sock practically knit itself. It seemed like I had just cast on and I was ready to turn the heel. The foot went just as fast too! 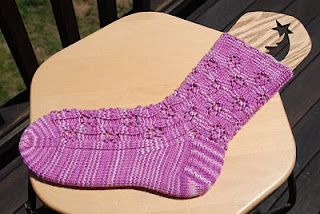 So now I have 5 single socks and one sock that is 3/4 done. I'm trying to stay focused and knit some second socks. If I did all those mates, I would have 6 new pairs of socks for fall! 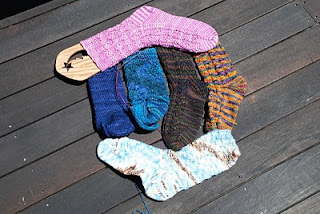 Maybe I should stay off Ravelry, they're a bunch of enablers over there, because I really want to cast on a pair or three of Knitspot socks with the Sock Knitters Anonymous group, something from the Socks From the Toe Up book with that group, a pair of Summer Lovin socks because I gave away the pair I made last year and really want a pair for myself, and the Rockin' Sock Club shipment will be coming in a couple weeks and I always get excited about that too.

What's calling to you?
Posted by dianne at 1:47 PM No comments: