I felt like a little kid today when the mailman came.  He brought me not 1, but 2 packages with yarn in them!
Spoiler Alert: Woolgirl Oz Lollipop Guild Kit is below, so come back later if you're waiting for yours.


First let me show you my new Socks That Rock. One of the retiring colors has been on my wish list for a while, so I decided to place an order, and I got a new color too :-)

I participated in the Summer of Socks again this year. The official KAL ended September 1st, but I extend my personal challenge until the Autumnal Equinox, which is Thursday. I finished my most recent pair of socks last night. The pattern is Thelonious by Cookie A and the yarn is Skinny Bugga by Sanguine Gryphon. The pattern is a great mix between simple ribbing and a lovely traveling lace panel and the end result is stunning! 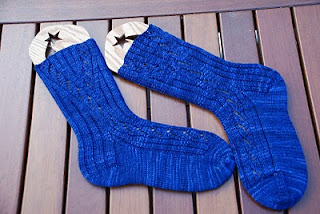 I don't have anything else on the needles that I could finish in the next 48 hours, so I am done for my personal challenge! Here's the money shot. 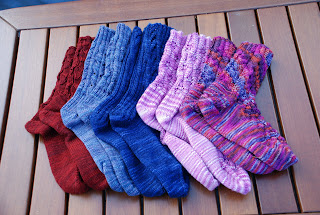 Five finished pairs of socks! Only one sock was started before June 21, so that is a total of nine socks knit between June 21 and September 20. Not too shabby :-) I'm already looking forward to next summer!
Posted by dianne at 5:33 PM 1 comment:

I think there's something about the beginning of the school year that makes me feel like it's a time of new beginnings. New sneakers, new haircuts, new notebooks, new routines, the negotiations of new bedtimes to name a few. I guess my knitting fell into that same new feeling. Although there has been little blogging, there has been plenty of knitting. Let me show you my new projects :-)

First up is a Theloniuos sock by Cookie A. I knit the first one in 5 days at the end of June and decided this was a good time to cast on the second one so that I would have another pair of new socks for the fall. (See? There I go with that new theme again!) Almost forgot, the yarn is Skinny Bugga in Karner Blue that I got in a destash from Mapleweave. 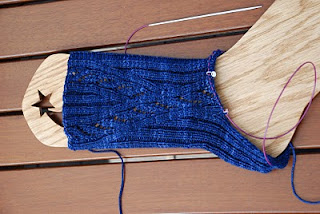 The next two are both for knit-a-longs on Ravelry. This one is a mystery sock on the Hazel Knits group. The pattern is by Melissa Goodale of Stick Chick Knits. I'm using the August Hazel Knits Sock Club color Sugar. I'm just about finished clue #2. Clue #3 is out, I just haven't gotten to it yet. 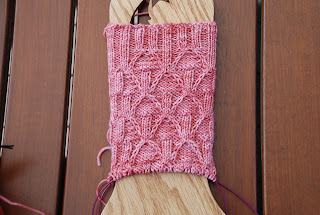 This sock is for the Sock Knitters Anonymous group. The September challenge is any pattern by Kirsten Kapur of Through the Loops. I chose the Mystery Sock from 2008. It combines lace and cables, which is something I've not done before. I got this far (see below) and tried it on. It was tighter than I was comfortable with, so have frogged it and am ready to cast on again in the next size up. Again I'm using Skinny Bugga in the color Cotton Stainer. 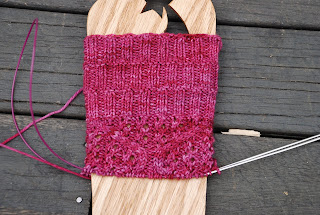 This next project should be really quick. It is the Kiddie Cadet and I'm knitting this in Cotton Ease. This will be for a 10 year old boy who lives down the street from me. He was recently diagnosed with Leukemia. He should have finished the first stage of treatment earlier this week and be ready to begin stage 2. Last week he was losing his hair. The weather has really turned to fall here recently so I thought I'd knit him a hat to help keep his sweet little head warm. 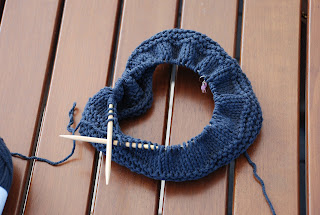 My last new project is an Ishbel. I think it's a knitting right of passage to make at least one of these :-) It's been in my queue forever! I'm knitting this with Dream in Color Starry and the color is Grey Tabby. I think it will be nice and neutral and be able to be worn with anything. The stockinette portion is done and I have knit the first row of the first lace chart. 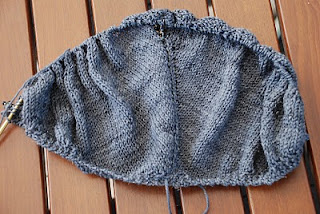 On the personal front, my husband has changed jobs. He will be doing the same thing, but has accepted a position with a company that was his direct competition. Because he is in sales, he will be honoring a non-compete clause for 4 months. He'll be doing a fair bit of traveling for training and such during that time and has already agreed that by spring I will totally deserve a week away for sock camp! YIPPEE!! Anyone know the dates yet? I'm ready to book a plane ticket :-)
Posted by dianne at 4:52 PM 1 comment: