My beautiful niece Marissa welcomed her second son on January 10th!  You know what that means.... Time for Auntie Dianne to make him something special :-)  I chose my favorite baby sweater pattern, Textured Fred by Louisa Harding. 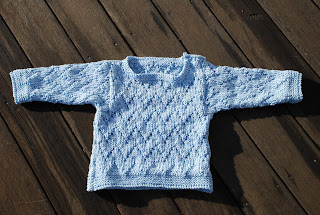 I love this sweater for it's simple, classic design.  It has a simple textured pattern framed by some garter stitch edges. 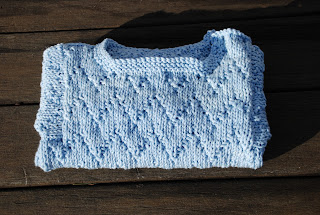 I chose Rowan Pure Life Organic Cotton DK in medium indigo, which is a perfect color for a sweet baby boy.  It's not too pastel, and it's not too dark.  I only wish that this was a machine wash yarn, because what new mom has time to hand wash baby clothes, but I couldn't find a machine washable yarn that I liked, that would be a good substitute for the yarn the pattern called for.

Welcome to the world Christopher Richard!  When you wear this, know how much Auntie loves you :-)
Posted by dianne at 8:20 PM 2 comments:

10 movies I'd Like to See Right Now!
Much like my Ravelry queue for things I'd like to knit soon, I have a pretty lengthy queue of movies on Netflix that I'd like to see.  Now that the Oscar nominations are out, there are a few that I'd like to see really soon.  Some are currently in theaters, and some have been around for a bit.
1. Red Tails
2. Moneyball
3. The Girl with the Dragon Tattoo
4. War Horse
5. Mission: Impossible - Ghost Protocol
6. The Ides of March
7. Joyful Noise
8. The Iron Lady
9. Dolphin Tale
10. One for the Money, which I'm planning to see Friday night with some of my girlfriends!  Keep your fingers crossed for me that it works out!
What movies are you hoping to see?
Posted by dianne at 9:25 PM 4 comments:

I Was Only Fooling Myself

I had a fun day today!  The Plucky Knitter was in Boston today having a trunk show with BabyCocktails and Cecily Glowik MacDonald.  It was at Another Yarn which is about a 90 minute drive from my house, in good weather.  I hemmed and hawed about whether to go or not because it was snowing, but in the end I decided that if I didn't go, I would have spent the afternoon wishing that I had! 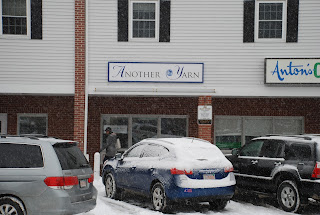 I hadn't been to Another Yarn before, but I have to say that I was VERY impressed with it!  It had a great layout, a nice selection of yarns to choose from,  was welcoming, and had a couple seating areas for sitting and knitting.  If this shop were closer to where I lived, it would totally be my favorite LYS. 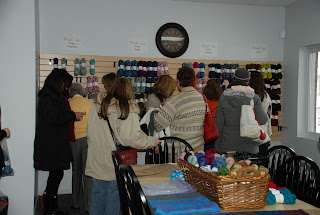 There was also this beautiful basket of sport weight on the table with a few sample knits. 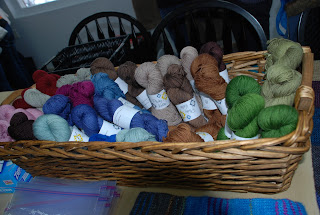 These were just a few of the garments on display. 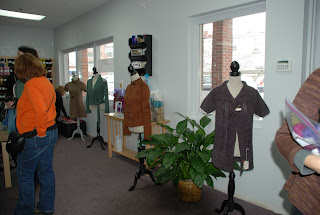 There was a table of Thea Colman's samples.  Thea is also known as BabyCocktails.  If you are not familiar with her designs, take a quick peek around her blog.  She is incredibly talented! 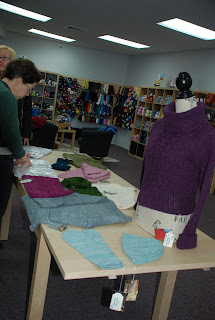 This is a closer view of some of her samples.  Most of these are knit in Plucky Knitter yarns.  The two pink designs are one of here newer releases.  I liked them on line, but I loved them in person! 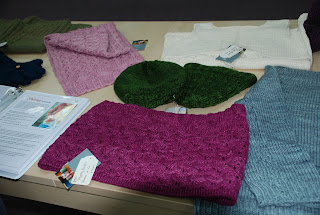 I also met Cecily Glowik MacDonald.  She was very charming and happy to talk about her designs.  I can't believe I forgot to take a picture of her table!  It was full of beautiful samples of hats, cowls, and sweaters. 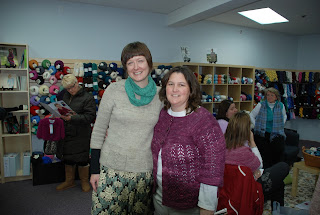 I did buy a copy of her book Weekend Hats and she signed it for me.  There are some great patterns in this book!  It has a wonderful selection of styles. There were 3 very different hats on display that I really liked and they are all in this book.  This book would be a great addition to any knit library! 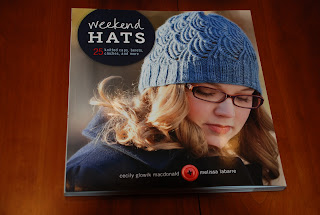 I went today convinced that I was going for "the social experience" and would only buy a skein or two of yarn for small projects.  While I was standing in front of the  Wall of Crack Plucky, thinking about what projects I wanted to buy yarn for, Thea wanders over beside me and starts pulling colors off the wall to put together.  She told me she was thinking about doing a color work project, and what did I think of this color with that color?  And what about this one? See that collection of colors on the table?  That's what she came up with.  I wonder if they will become something if if she was just thinking?  I'll have to stalk her blog! 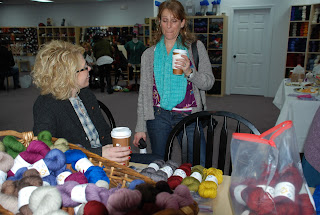 While I was talking to her, I told her how much I love the sweater she's wearing and that someday I'd love to make it in Primo Barn Door.  "Oooo, that would be reeeaaaally pretty" she says.  Next thing I know Sarah's sister Hayley has 15 skeins of this color laid out on the table and we're going through them picking out the 7 best matched ones for the sweater. 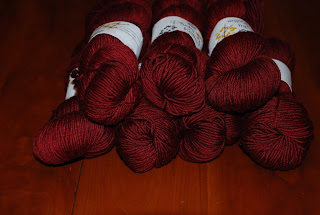 I also got a skein of Back 40 for a hat from Cecily's book. 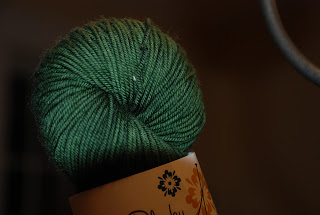 When I got home I admitted to Tom that I was weak and that I had succumbed to the power of the yarn and peer pressure.

This is his shocked face :-) 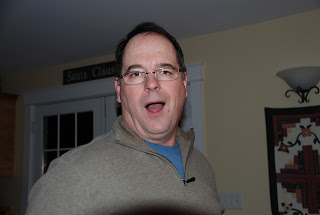 So yeah.  I was only fooling myself when I walked out the door this morning thinking that I could go to a trunk show featuring incredible yarn and two fabulous designers, and come home with only a token skein or two.  My "More Yardage Out than In" goal for 2012 just went into major negative territory.  I'll update that later this week.  I have a baby sweater that just has one more seam to finish, so I'll have some official yarn out yardage tonight or tomorrow.
Posted by dianne at 9:14 PM 2 comments:

I can't believe it's January 15th already! It seems like I have just finally taken breath to recover from the holidays and January is half over.  Now that everyone is back to school and work and all the usual craziness has resumed, I reviewed what I completed for 2011.  The final counts are:
According to my Knitmeter counter that translated to 9747 yards of yarn knit, which is 5.54 miles!

I would show you a collage of last years' projects but I got a new computer for Christmas and I'm still getting acquainted with it and moving files from the old one.  I made the big move from PC to Mac. I am loving my new MacBook, but I haven't figured it all out yet :-)

Looking back on last year's success has had me thinking about what I want to accomplish in 2012.  The big goals are: 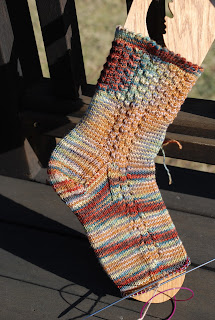 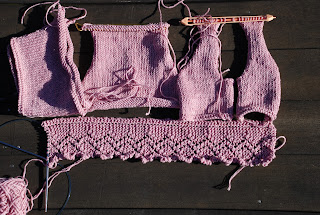 I'm off to a good start already.  These are a couple of the projects that I'm currently working on!

I hope you're enjoying the long weekend, and if you're in the US Northeast, STAY WARM!
Posted by dianne at 4:48 PM No comments:

10 Favorite Soups
This week's prompt is 10 Favorite Soups.  What a great topic for this week as it seems that winter weather is finally settling in for NH.  There is a certain comfort that comes from a warm, filling hearty soup.  I have to admit that I am a great baker, but making soup is something that I wish I was better at.  Anyway, here are some of my favorites, as well as my family's favorites.

1. French Onion Soup. I have a hard time passing this up when it's on the menu in a restaurant.
2. Beef Stew.  I like it thick with lots of potatoes, peas and carrots in it.
3. Chicken and Dumplings.  I use my Mother-in-laws recipe.  Nothing fancy about it, but it's hearty and it smells so good while it's simmering.
4. Baked Potato Soup.  My family likes this recipe best.  Fair warning, it is really rich!
5. Chicken and Gnocchi Soup.  I've made this recipe a few times and shared it with friends who have also made it and loved it.  One of my friends asked me if it was as good as Olive Garden's.  I honestly don't know as I've not tried theirs.
6. Italian Wedding Soup.  I love the little meatballs in it :-)
7. Broccoli and Cheese Soup.  I have a great recipe from a school fund raiser cookbook.
8. Chicken Noodle Soup.  I love a good old-fashioned one with chunky veggies and lots of noodles.
9. Pasta Fagioli. I was introduced to this by my best girlfriend from college.  Her family is Italian and she has an old family recipe that is to die for. Some day I'm going to get it out of her!
10. Campbell's Tomato Soup.  I have to admit that this is total comfort food.  I like mine made with milk with Ritz crackers in it and a grilled cheese sandwich on the side :-)

What are your favorite soups?  If you have a recipe you'd like to share, I'd love to have it!  For more great ideas, visit Carole's blog and read some of the links of people participating.  There are a lot of great ideas!
Posted by dianne at 5:37 PM 1 comment: