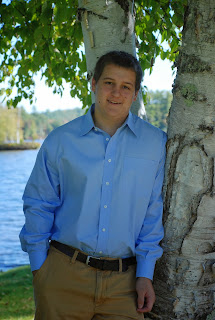 Good looking kid, isn't he?  He would be my youngest child and today the one who makes me appreciate why some animals eat their young.

It began innocently enough like this.....
Chandler: Mom, where are my spare helmet parts?
Me: I don't know.
Chandler:  You said you were going to put them somewhere safe so I'd know where they were the next time I broke a buckle.  And I need a clean sweat band too.
Me: Are you sure they're not in your hockey bag?  Or your room?  Why would I have them? You drive yourself to practice now.
Chandler:  I looked and I couldn't find them, but I'll look again.
Me:  Do you want me to take a look tomorrow too?  (Now, you experienced parents know that this is where I made my first mistake...)
Chandler:  Would you?  I'd really appreciate that.

Fast forward to today when I actually crossed the threshold into the deep abyss that is his room.  Oh. My. God.  Let me say that mostly I think that I am a good parent.  After 3 sons I have pretty well mastered the art of picking my battles and navigating the excellent life lessons to be learned by natural and logical consequences.  Let's just say that the natural consequences of the state of his room were about to start trickling down the stairs and attracting vermin. Not good.  Into his room I went armed with trash bags, laundry baskets, pledge and my vacuum cleaner.  I handled it quite well really even after 2 bags of trash and 3 baskets of laundry were removed.  Where I lost it though.....?  That would be when I decided that looking in his desk for the still missing helmet parts was a good idea.  His top drawer is filled with pencil shavings.  That's right.  Pencil shavings...... Because apparently it was too much of a hassle to get the trash can TWO FEET AWAY!!!!  I'm going to need an adult beverage tonight.  Just saying.....

Time to take a deep breath and find my happy place......

So let's talk knitting and what's on the needles :-)  I'm still chugging along on my Rolling Rock.  This was my Plucktember project that clearly didn't get finished in time.  So on to Plucktember..... I took this picture this afternoon and am just seeing the block of lighter color......  It's the first time I've noticed that so I'll be waiting until we have a day that's not overcast and look at it more carefully.  I'm 3 inches from finishing the body, but I suspect now that I may be ripping back some and alternating skeins.  It's crazy how they can look so excellently matched but it's not until you see them like this that the differences show. 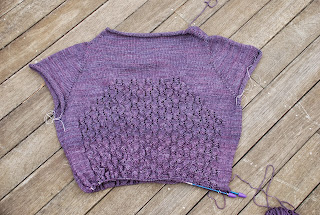 I've started a few new projects too.  The Socks That Rawk group on Ravelry chose Toasty Twist for one of the knit-a-longs this quarter.  I've had this pattern in my queue for a very long time!  I cast on with Rocktober in lightweight.  I love this color but have been having a hard time finding a pattern that works well with it. I'm not sure this one's a winner either, but I'm going to knit a couple more inches before I decided. 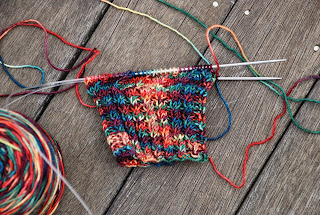 This is a hat by Brooklyn Tweed called Habitat. I'm using the Peace Fleece that I bought while away on for the Make. Wear. Love Retreat. 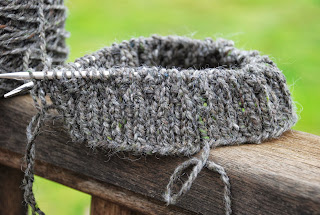 This is the beginning of Windschief by Stephen West.  I'm using Madelinetosh Tosh Vintage in the color Fig.  (Ribbing.  Super inspiring, isn't it? LOL) 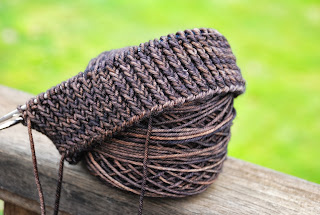 This next one isn't on the needles yet, but I can't wait to start it.  It's Acorn Trails by Amy Herzog.  I got an email Saturday that this was released and all I could think was that I needed to knit this sweater and I needed to do it right now!  And gosh, wouldn't that look great in Harrisville, which my LYS pretty much always has in stock!  I was thrilled to see that Harrisville was the yarn that was used! It took all of my self control not to make a special trip to Spinning Yarns on Sunday to buy yarn for this. 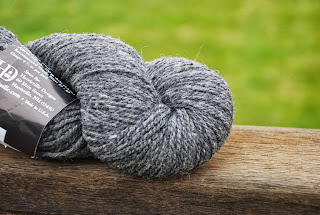 But I went yesterday :-)  I'm hoping this charcoal color won't be too dark for the lace and cable work.  I'll be swatching in the next few days to decide!

I'm feeling happier now.  Yarn does that for me :-)  Thanks for letting me rant a bit!

PS - The helmet parts are still missing.  I guess I'll be calling Promasque tomorrow to order more....
Posted by dianne at 5:36 PM No comments: