The Summer of Socks Begins!

It's time for Summer of Socks!  I look forward to this every year and usually I'm chomping at the bit, ready to go on Memorial Day.  In the past though, the SOS has followed the calendar and not started until June 21st.  This year though, the wonderful moderators decided to adjust the KAL to run from Memorial Day until Labor Day.  I love that because to me, these two holidays mark the beginning and end of summer.  It's a No Pressure year too, which I love.  Knit anything you want, including WiP's, and it counts!  Perfect!

So I'm continuing on my quest to keep up with the 2 sock clubs I joined this year.  I recently finished Petrosinella which was the Rockin Sock Club March shipment.  This pattern was a little hard on my hands and I had to take regular breaks from it, but it was worth plugging along and finishing them. 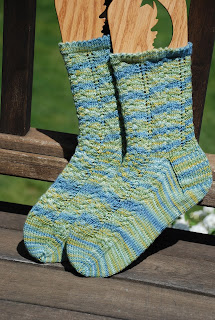 They started with a pretty picot edge and then followed by a lace and cable pattern. 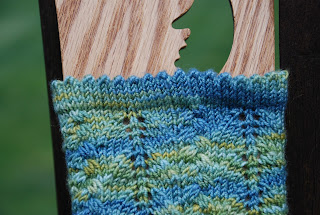 The heel flap is eye of the partridge which I hadn't done in a while.  I think it's quite pretty in this variegated yarn. Then I love how the cable lines up to split and half of it runs along the side of the foot. 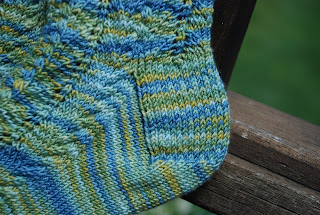 It ended with my favorite wedge toe. 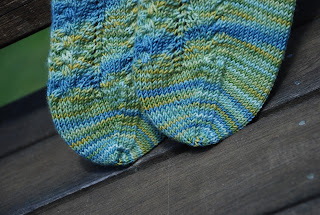 So March is done and May's kit is here and next to be wound and cast on.

I also finished one of the patterns from the April Cookie A club.  This pattern is Tulip Socks.  I substituted Hazel Knits Artisan sock yarn in the color Pink Ribbon for these.  The club yarn is a gorgeous lavender from Dream in Color Everlasting sock, but I think that tulips and pink just go together.  I'm going to use the lavender yarn for the other club pattern. 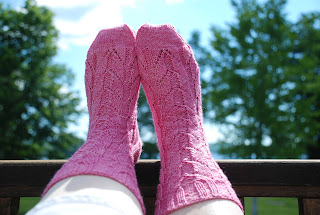 These were pretty straight forward and an easy knit.  The one thing that really stood out on these was the toe.  The instep had more stitches than the foot so with a little clever decrease in just the right place the 2 purl stitches on the sides of the instep become a frame for the toe.  I love little details like this! 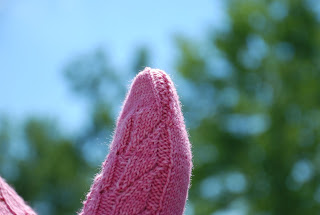 The June shipment arrived last Monday, so in my quest to keep up I'm going to cast on one of the June patterns with the club yarn, then go back and do some of the old kits that are still waiting to be knit.

Happy Summer of Socks!
Posted by dianne at 4:15 PM No comments:

I finished my Irish Coffee sweater just as the heat wave set in last weekend.  I really enjoyed knitting this sweater.  The yarn, Madelinetosh Vintage in the color Mourning Dove, is a dream to work with and the stitch definition is great too.

This sweater has some nice features.  It's knit from the top down so I was able to try it on as I went to make sure the fit was what I wanted.  I like the V notch at the neck line.  It feels like it opens the neckline a bit. 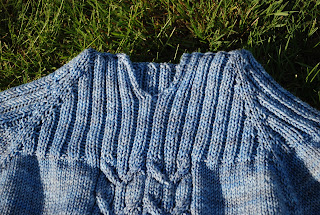 I moved the waist decreases up so that the narrowest part actually falls at my waist.  One of the curses of being "petite" is that everything needs to be altered.  I also added more increases for the hips so that it fits the way I wanted it to fit. 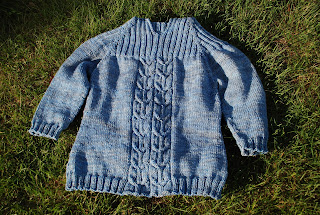 I also love the way the cables flow into the ribbing.  This cable is on the back as well as the front 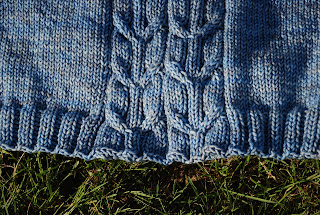 So here it is completely finished being modeled by my lovely dining room chair.  This picture is also the best representation of the color. 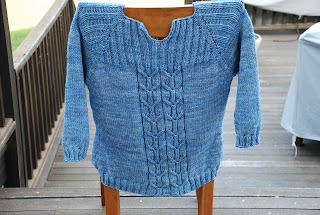 Now that this is finished I'm itching to start another sweater!
Posted by dianne at 8:13 PM No comments: