I have a new love in my life and her name is Hazel! Hazel Knits actually. I had bought a couple skeins of the Artisan Sock Yarn a while ago and I've been wanting to give it a try. I cast on the Summer Lovin Sock by knittingnonstop this weekend using the Cabbage Rose color and WOW do I love this yarn. It has a great feel to it and it makes a beautiful fabric. It's sturdiness and twist remind me of Socks That Rock, but Hazel Knits has some nylon in it as well. I wonder if the nylon actually makes a difference in how the yarn wears? 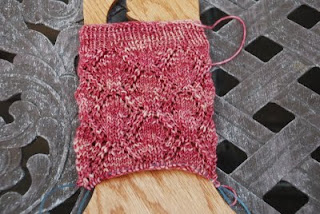 I also tried a new cast on. Turtlegirl76 mentioned on her blog last week that she had used a super stretchy cast on for some knucks that she learned in a cast on class at Sock Summit. It is the Twisted German Cast On. I found this handy video tutorial on You Tube and decided to try it myself. LOVE. IT. It is in fact super stretchy and it is very uniform and sturdy in it's appearance as well. 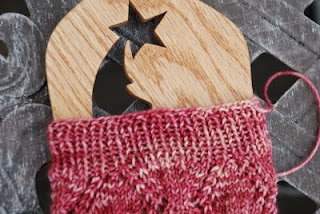 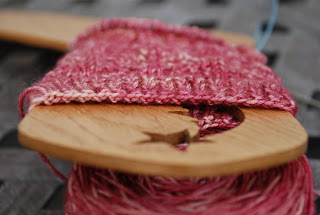