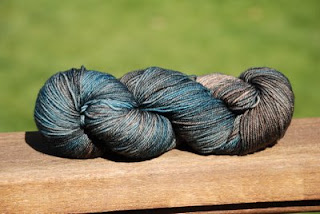 A few new yarns have found their way into my stash over the last couple of weeks. First up is the Malabrigo Sock Yarn. I love the Malabrigo worsted and have made several hats using it. It's nice and soft and the kids don't complain about it itching. It also has some great stitch definition. So when I heard that Malabrigo was coming out with a sock yarn I was excited. It took forever for some to actually arrive at my LYS, so when I heard that it had finally arrived I scooted right in. I really only needed a new addi turbo needle, but that was the perfect excuse to check out the new yarn. I bought a skein in the colorway Persia. It is as soft as their worsted and it was flying out of the store. I'm looking forward to trying it out. 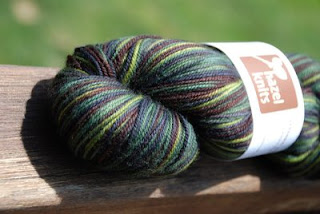 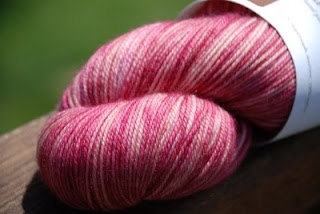 I also received an order from Woolgirl. I saw these colors on Jen's Blog and I couldn't resist. Both of these skeins are Hazel Knits Artisan Sock. The first color is Weekend Warrior and the second one is Cabbage Rose.

The other fun thing that I've been doing is making these cute little stitch markers. Now I'll admit, I may have what some people might consider "a problem" with stitch markers. I love them. I don't think that you can have too many. And I think you should have them in any size you want. Personally it drives me nuts when I'm knitting away on socks and I come to an area that is marked for whatever reason, and the marker is 6 times larger in diameter than the needle. It's bulky and awkward. So after a quick lesson at sock camp and a couple online tutorials, I decided to try making some myself. It didn't take too long to get the hang of it and frankly it's addicting. Here is a small sample of what I made. 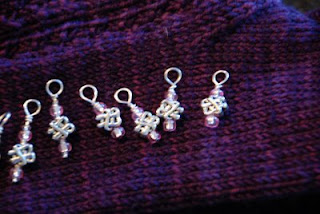 Check back later this week. I've almost finished the body of my February Lady Sweater and I hope to post pics of that soon. I also got my Woolgirl Oz Sock CLub kit last week. Pictures to follow soon!
Posted by dianne at 5:10 PM