The Whole Truth and nothing but....

Last time I posted I showed you everything that I finished in 2009. Now that it's 2010 I thought it would be a good time to re-evaluate all the projects that I have going and play Finish or Frog. Now I will admit that once I started looking I found stuff that I had frankly forgotten about! The grand total of UFO's is 18!

Let's start with Socks. I have 8 pairs of socks on the needles! With the exception of the sock on the far right, these are all first socks too. 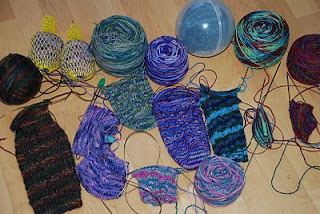 I also have 3 single socks who need mates. The sock on the far right does have it's mate started so that sock will be priority one so that I have a new pair fairly quickly. The sock in the middle here is languishing because I'm not thrilled with the finished product. I'm going to knit it's mate with a smaller needle and see if that makes me happier. 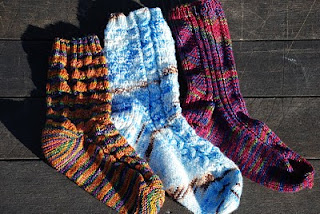 This one I'm going to frog. It's the December shipment for the Hazel Knits sock club and I love the color. My first thought when it arrived was that it would make awesome Monkey's, but I already have two pairs of Monkey's so I should make something different.I picked a pattern from the Socks from the Toe Up by Wendy Johnson that I got for Christmas, but I think the yarn's too busy for the pattern so I'm going to rip it out and probably go with my first instinct and make more Monkey's. You can't have too many of them, right? 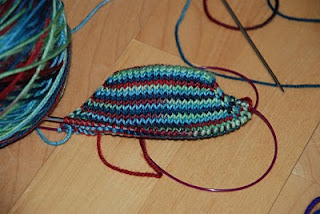 These 2 are getting frogged too. The Leyburns in Incredible Shrinking Violet? Ugh! I'm not sure why I stuck with them this long, other than it was a knit-a-long and I wanted to play. The Zoom Zoom's in Peaseblossum? Love the pattern, love the colorway, just not loving them together. I've tried resizing the pattern and changing needle sizes, but these two are just not working together for me, so rip away! 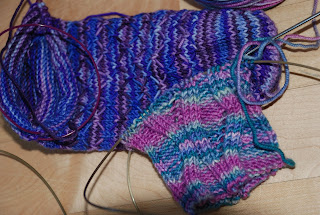 This is a head scratcher. Fritzy's Sock by Mountain Colors in Bearfoot. I would really like to finish these. Problem is I have misplaced the pattern, somewhere in this house, and can't find it anywhere :-( I either have to try to read the knitting and try rewriting it for myself, or cave and buy the pattern again. Hmmm.... 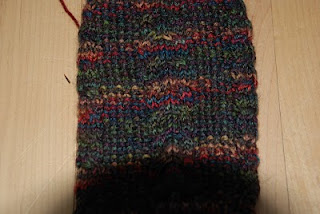 Moving on to other things, this is a pair of Fetching fingerless gloves. I got, literally, about 8 rows done before I became distracted by other things. Must finish these because I really want and need some new mittens! 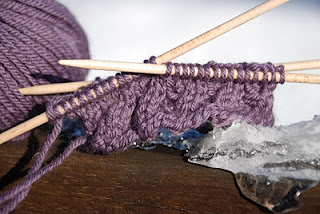 This is pure loveliness. It is a Luna Moth Shawl that was a Christmas gift for my MIL. I got about 1/3 of the bind off row done and ran out of yarn. Drat! After much worrying about what to do, I finally gave it to MIL and together we decided that it really would fit her better with another pattern repeat anyways, so I ordered more yarn. Murphy being the tricky little son of a gun that he is, I ordered 2 skeins of Woobu, in case the dye lots are way off and I need to start anew. It shipped yesterday and should arrive tomorrow, and by ordering 2 I have guaranteed they will be a perfect match to the original skein :-) 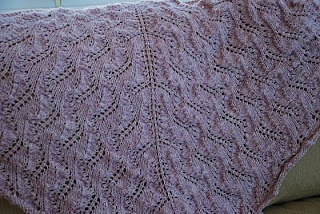 Now the sweaters. There are 6. Which honestly surprised the dickens out of me. 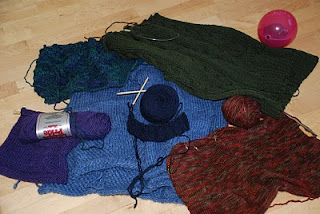 First up, is a Central Park Hoodie in an Cascade 220 color "dyed exclusively for the Elegant Ewe". It's Hunter Green and I bought the whole lot in a clearance bin. Great color and I scored a great buy. I've been working on this off and on for over a year. Should be finished soonish. 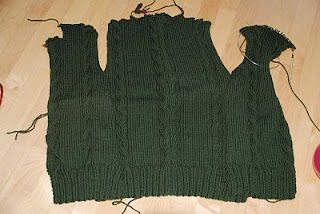 This is from a pamphlet by Artyarns. It wll be a raglan v-neck with randomly placed cables separated by a garter row every 20 rows. I'm using Malabrigo worsted in Stonechat. This is staying in the finish pile. 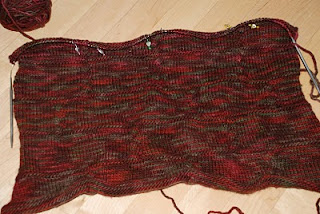 This is a Lopi Diagonal Rib Cardigan. It just needs to be blocked, seamed, and a button band added. Should be a quick finish and I'll probably do it soon so that I can wear it while it's still cold! It's been in this state since sometime in 2006. 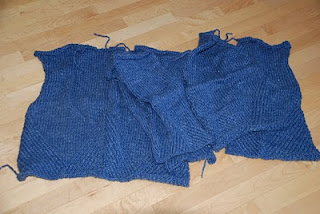 This was going to be a baby sweater. While knitting the back I lost the second skein of yarn. The expected baby I was knitting it for will be 3 next month and I still haven't found the rogue skein! It's probably with my Fritzy's socks pattern :-) Definitely frogging this one. 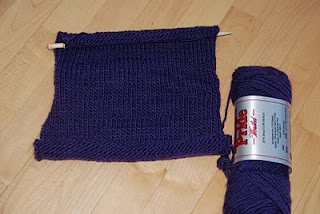 This? There are no words. I think it's Plymouth Encore and the pattern is a waffle stitch. It was suposed to be a cardigan. I went to what is now my least favorite LYS and said...."I can knit and purl, I'm bored with scarves, and I want to try a sweater." This is what I left with. Definitely frogging. 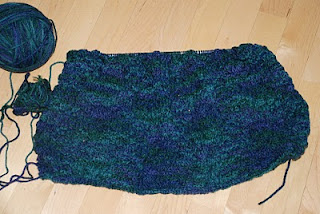 This was going to be Aranmor. Half a cuff was as far as I've gotten. The pattern is puublished in Alice Starmore's Aran Knitting, which has been out of print for a while. I borrowed a copy through inter-library loan so I only have a working copy that I made. Dover publishing will be re-releasing the book in the Fall of 2010 "with additional content". This is going to stay a UFO for now, but I think I'll ultimately frog it and do something else with the yarn. Almost forgot, it's Cascade 220 in Navy blue. 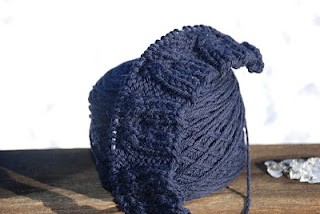 So that's all of it. Literally the good, the bad, and the ugly. I've joined the UFO Smackdown on Facebook and the goal is to get all of these cleaned up by the end of 2010. With the 6 projects I've already decided to rip out, that leaves me 12 projects to finish by year's end. One a month? I can do that!
Posted by dianne at 2:44 PM