The Olympics are over and I miss them already. There are so many fun events to watch and not enough hours in the day to take it all in. Like many of you I decided I was going to participate in the Ravelympics and the Knitting Olympics. I picked my projects, wound some yarn, and rushed home February 12th to park myself in front of the TV for the Opening Ceremonies. I cast on my February Lady Sweater and started plugging away on it. It was the very next day that my plan took a detour.

Remember the hat I was making for my son that matched his hockey jersey? The one my friend Kelly designed and made for her son? The one that all the boys on the team wanted? Well, I spent the entire Olympics knitting hats for the boys. I finished 7 hats during that 2 week period! And I have finished 2 more since the Closing Ceremonies. (Below is Kody wearing his hat while we were tailgating between games this weekend) 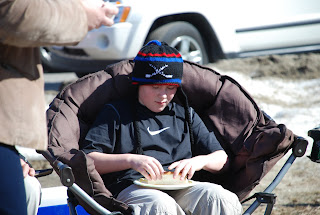 Just by funny coincidence, the boys advanced to the finals for both leagues that they participated in this season. The Granite State League Championship game was at the same time as the Men's Hockey Gold Medal game! Chandler's team won! Here they are with their trophies :-) 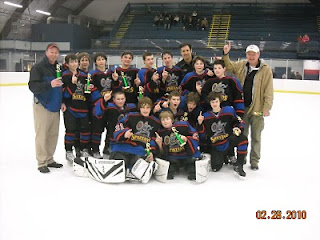 After the Olympics were over I was feeling pretty disappointed that I didn't get my sweater done. So I decided to add up the yardage from all the hats I made to see if I was even close to knitting the right amount of yarn I needed. The sweater calls for 1050 yds of worsted. With all the hats and what I did get done on the sweater I knit 1130 yds during the Olympics. I totally could have completed that sweater. But I have 8 very happy boys and 1 little sister instead. I think it was a success :-)
Posted by dianne at 4:36 PM