It's been so long!

I have finally finished a pair of socks for August! It seemed like it took forever, but it really didn't. I had the best of intentions and the best of plans, but I have a family and they have had other ideas as to how I should be using my time this summer. Two of my three boys are back to school now, so I've regained some control of my time. 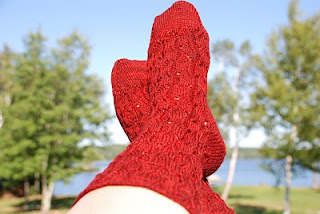 The pattern is Papaver by Knitspot, the yarn is Bugga! by The Sanguine Gryphon in the color Long Horned Beetle. I cast these on in July as part of the SKA challenge on Ravelry. The designer for July was Knitspot and I have several of her patterns in my queue. 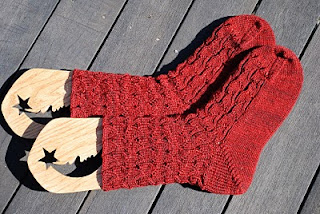 In trying to be true to the "challenge" of SKA I decided to knit the short row heel that the pattern calls for. Normally I would substitute a heel flap as I don't think that short row heels are my best skill but I would really like to improve them. I always get a hole on the first round after the heel is completed. Fortunately for me on this design, it kind of looks like it belongs there, so I'm not going to dwell on it.

I cast on a second Knitspot pattern in July too. I should back up a bit though and tell you that this cast on is also part of the July Rockin Sock Club! Yay! The July kit came with this awesome colorway, Firecracker, and two awesome patterns! I was not sure how I was going to choose which to do first and with the kit's yarn until I realized that one of the patterns was by....... you guessed it, Knitspot! 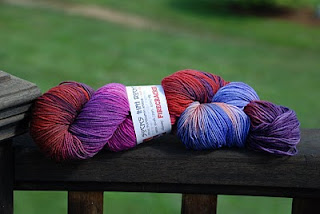 My decision was made! This pattern is called My Heart Beets for U, and the heel flap is a beet motif :-) This picture was taken a while ago. I am actually almost done the first sock and I hope to finish it tonight. I have just one more pattern repeat to go and then the toe :-) 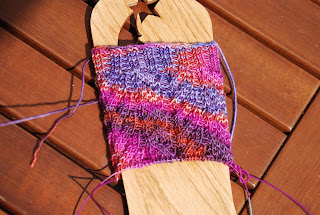 I'm on a mission to complete this pair by the end of the month! I think I can do it!
Posted by dianne at 6:36 PM