It's been a while since I showed you what's on my needles and getting attention.  There are quite a few things actually, and they're almost all red!  Weird.  But I'm feeling inspired to get some of these finished, so I'm going with that feeling until it passes.

First, I have the Katniss socks.  I cast these on for the SKA red challenge in September and the Hazel Knits RoseHiver challenge for Sept/October.  I need to finish these by the end of the month for both challenges.  That shouldn't be a problem as I am ready to start the heel flap of the second sock. 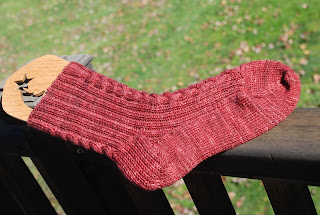 I started the Lillianna sweater for my niece.  I have 1 1/2 pattern repeats done on the body and the pattern calls for 4.  I tried it on Morgan this weekend and it will be a perfect fit for the winter. My sister loves it!  We decided that since it will fit Morgan through the winter that long sleeves would make more sense here in NH, so I'm going to lengthen the sleeves. 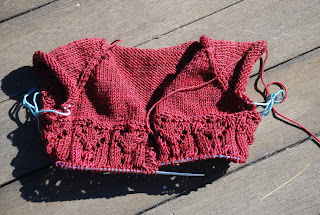 Vodka Gimlet is coming along as well.  I am ready to start the "hem detail" at the bottom of the body.  I'll be starting the sleeves in no time and wearing this soon! 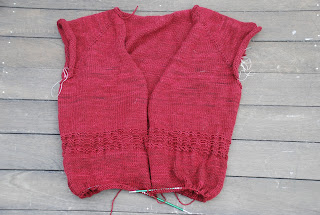 I also have a cowl that is almost finished so I decided not to show you that today.  I'm hoping/expecting to finish it tonight!  You should be seeing it as a FO in the next few days.  Then I will have to decide whether to keep it for myself or gift it.  It will be a tough decision.

This is the yarn from the Cookie A Sock Club.  The yarn is from Green Mountain Spinnery, which is kind of local for me.  I've not tried any of their yarns though because none of my LYS carry their yarns.  I'm not sure I like it.  It has a rougher and earthier feel to it than what I usually like, but I can see how it will work nicely with the cabled sock pattern included this month.  The lace sock pattern though.....? Not so much.  I'm sure I'll knit it sometime, but it's not screaming at me yet. 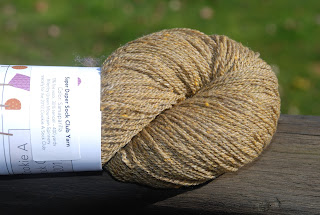 I also got my Rockin Sock Club kit.  It's Socks That Rock lightweight and.... 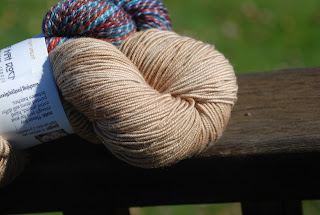 some complimentary Silkie.  The sock pattern has as option to embroider with the Silkie.  It makes a very cool Stained Glass effect on the sock, but there is no way that I will go to that extra effort.  There is also a pattern for a colorwork hat which is what I think I will make with this kit. 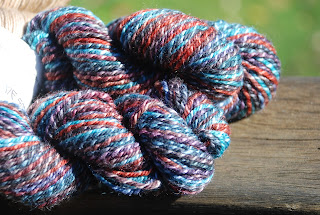 I'm still expecting my Hazel Knits sock club and Plucky Classics.  The Hazel Knits is shipping today.  I wonder if it will be in the brown family too?