It seems like I haven't finished much recently, but I actually have been doing a fair bit of knitting. I did finish a pair of socks a couple weeks ago. The pattern is Pomatomus by Cookie A and the yarn is Hazel Knits Artisan Sock in It's a Wrap from the December Sock Club shipment. It seemed like I was the only person in the knitting world who hadn't knit this pattern, and now I have. I like the socks and they fit well, but I doubt I will ever knit this pattern again. So much ribbing with the knit stitches knit through the back loop. A few are fine in a design, but a whole sock worth? But they do suit the design well. 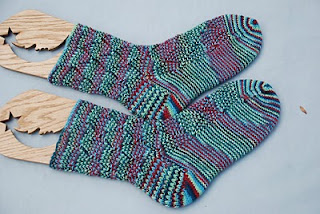 One of my husband's close co-workers recently became a grandmother and he asked me to make something for her new grandson. So I made another Fred sweater from Louisa Harding's Natural Knits for Babies and Moms. I used Knit One Crochet Too's BabyBoo which is a bamboo/nylon blend. I really like it and will definitely use it again! 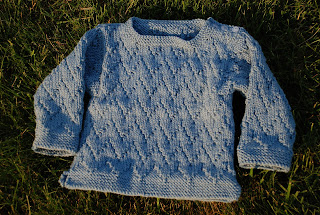 I have a few other projects getting some attention right now too. First is Raven Swirl Socks by Cookie A. This was the Rockin Sock Club kit from last November and I finally cast it on in April. 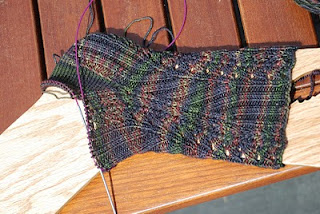 Although I find the pattern easy and quickly memorized it, I was having trouble while I was out and about if the light was not great. After having to rip back and fix mistakes that I had made because I couldn't see more than once, I decided I had better cast on something lighter that also had an easy to memorize pattern.

So I cast on Summer Sox, also by Cookie A in Skinny Bugga in Swift Long-Winged Skimmer that I got from a destash on Ravelry. I have to tell you, I love this yarn!!! It's so soft and squishy, it has great stitch definition and the fabric it makes is to die for! (I may have just ordered some Bugga as well last week) 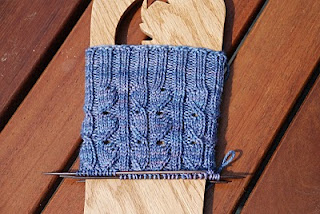 See those nifty dpn's? Tom got me a set of Lantern Moon's sox sticks for my birthday a couple weeks ago. I don't often use dpn's for socks, but these are a pleasure to use!

The last thing getting my attention right now is CeCe by ChicKnits. I'm knitting this in Cotton Fleece. The fun part about this is that it has turned into an impromptu Knit-a-long with some of my smackdown buddies. I had cast on and was on my second repeat when Nathania tweeted that she had just cast it on. Also joining in are Knittinggolfer and Altygrae! It's always more fun to do something with friends! 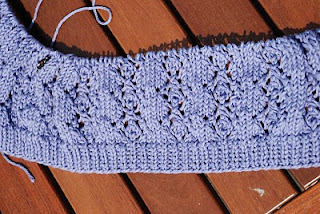