I had big plans for Socktober, but unfortunately I fell far short of my goal.  I already showed you the socks that I finished for the Hazel Knits mystery Sock, so I did complete at least one pair of socks.  Let me show you what else I was working on.

I had cast on the Through the Loops Mystery sock from 2008 for the September SKA challenge.  About half way down the leg I decided I better try them on because the cable seemed to have very little give.  Good thing I did because it was more snug than I like my socks to be.  So I ripped it out and started over with the 72 stitch size.  8 little stitches doesn't seem like much, but my goodness, it seemed to increase the knitting time 10 fold! I finished the first sock a couple days ago.  There is no way I'll be able to make the second sock by the end of the month. 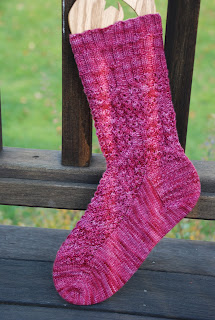 Here's a close-up of the cable and lace leg pattern.  I'll be casting the second sock on soon, otherwise I fear this would be a lonely single sock for a very long time. 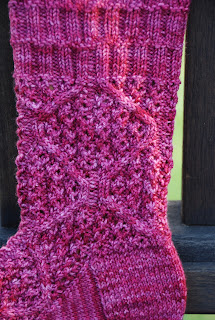 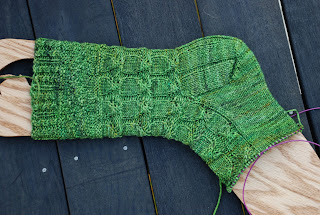 At some point during the month I realized that I had too many projects going at the same time with cables.  That was the problem.  Cables.  And I was sick of them.  So I started yet another sock, but without cables.  This is Wanida by Cookie A in Socks That Rock colorway ........... Rocktober!  I loved how it was striping in the ribbing, then I moved on to the pattern and it started pooling wickedly.  Here's one side.... 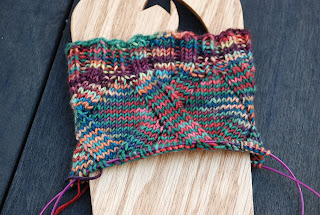 and the other side.  I'm thinking about going down a needle size to see if I can get back to the striping. 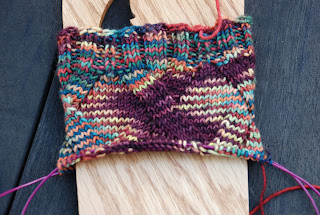 Around the middle of the month I decided that I was cold and what I really wanted was a sweater.  I stood in my closet and looked at my choices.  How is it that all I seem to have are sweatshirts and Holiday sweaters?  Seriously.  I'm a knitter!  I should have dozens to choose from! Then it hit me.  I have 5 sweaters in progress and the yarn for at least 2 more in my stash.  Sorry socks, you're going to have to share my knitting time for a while.  I pulled my February Lady Sweater out, figured out where I left off, and started knitting again.  I had forgotten how much I love this pattern!  I was able to add about 4 inches to the length this week.  If I keep this pace up, I should be finishing this beauty in less than 2 weeks! 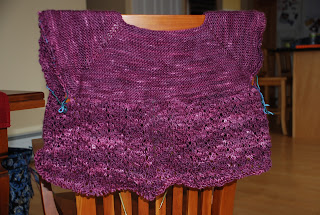 Speaking of sweaters, have you heard about Knitquest's A Sweater for All Seasons Club?  I'm so excited about this.  Flint is the first sweater in the club and I have been waiting for this pattern to be released for a while.  I signed up for the club right away and decided on In the Navy for my color. The yarn arrived earlier this week. 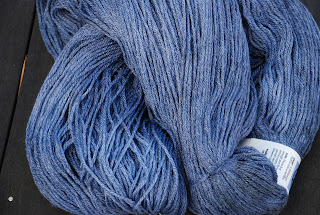 I love this color!  I can't wait to get started, but I'm making myself finish the FLS first!
Posted by dianne at 5:21 PM