The First Pancake Never Comes Out the Best

I like to keep my projects nice and organized and my favorite way to do that is with Box Bags.  I have a few of them, but not enough for all my projects.  Some people, including my immediate family members, would say the best way to fix that problem is to finish some of the projects I have going.  I think the best way is to get more project bags :-)  Buying more bags though means I have less money for yarn :-(  So with my trusty friend Google I went looking for tutorials on the web to make some.  I thought that this tutorial was the best one, so I bookmarked it for when I was ready to sew.

Yesterday was finally the day that I dug out my sewing machine and stumbled my way through my first bag.  Tom was away, the boys were busy so I could spread out over the dining room. This morning Tom sees my first completed bag on the dining table and comments on it.  "Hey!  You made that project bag you wanted to.  Looks good!"  "Well, I don't think I should quit my day job for it"  I replied.  "Why?" he asks.  (At this point it's only fair to tell you that he was not wearing his glasses) "I'm not sure if it's more Dr. Seuss or Tim Burton-ish, but it is so not symmetrical it's kind of embarrassing."  To which he replied..."Well you know what they say.  The first pancake never comes out the best."  I think he's been waiting to use that phrase since he first heard it on Modern Family!

My first bag is taller on one end than the other, by almost 3/4 of an inch. 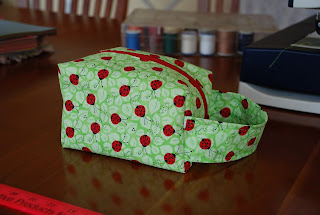 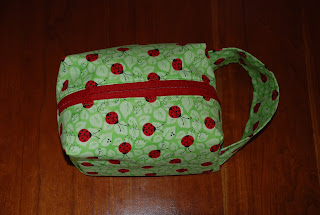 And I managed not to attach the whole end of the handle on one side! After examining my bag and reviewing the directions I was able to pick out a few areas that i should have paid more attention to and been more particular about, like pinning things in place and measuring :-)  Today I made my second bag and it came out much better than the first!  There are still a couple small areas to tweak, but I think I have the hang of it now.  I forgot to take pictures of the bag open, but the lining fabric is red with white polka dots.  I love this combo, it's so cheery.  I also like the red zipper better than the white.  I couldn't decide in the store, so I bought one of each. 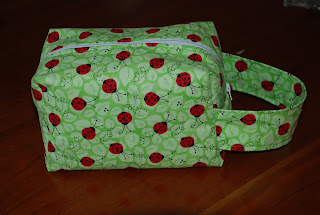 I need to go back to JoAnn Fabrics to get more interfacing, but I already have fabric picked out for my next bags. 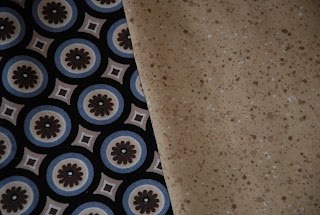 And with a little bit of math, I think I can adjust some measurements and make bags of different sizes.  The tutorial makes a bag that's great for small items, like socks or mittens, but I'd like a box bag big enough for a sweater too!

How do you like to organize your projects?
Posted by dianne at 3:56 PM