I've had the best of intentions to do a quick blog post each day for a bit to catch up on all the projects I've been working on, but that clearly hasn't worked out very well for me.  Each day seems to slip by me and I haven't quite finished everything I've wanted to.  So I'm just going to do one catch up post and feel better about it.  How silly of me to put that pressure on myself!

Anyway, I finished the Washington Square sweater a couple weeks ago and I have to say that I love it!  I've worn it several times and washed it a couple times also.  This first picture is after it's first trip through the washer and dryer.  I used Miss Babs Yowsa for this sweater, which is super wash wool, and it is fantastic!  It's smooth to knit with and it has a gorgeous bloom once it's washed.  (The picture is kind of dark, sorry, but if you click on it it seems to be a little better) 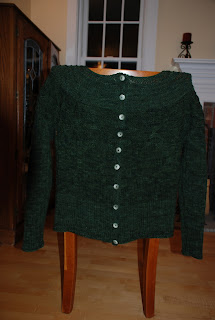 Here's the detail of the yoke.  Easy peasy pattern and I like the effect. 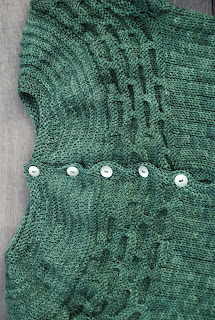 I found these cool buttons at JoAnn's Fabrics.  They're a little darker and richer in real life and match beautifully. 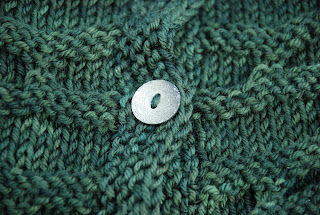 I would definitely make this sweater again because it is so comfortable to wear.  The only thing I would do differently is knit it at least one size smaller than I did, maybe two.  The ribbing on the body is very forgiving, and the yoke design seemed to grow a bit.  I would also pick up fewer button band stitches, especially in the yoke area.


I also finished my Rambutan socks from the December shipment of the Cookie A Sock Club.  I used the club yarn, which was Bugga for December. 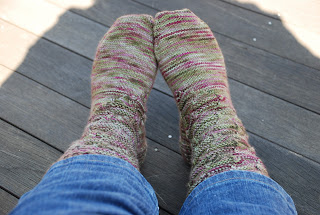 This pattern is mirrored for a left and right sock.  I don't knit patterns like that often but they are fun to do once in a while. 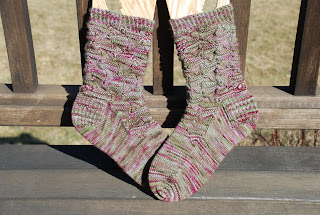 Here's a close up of the leg pattern. 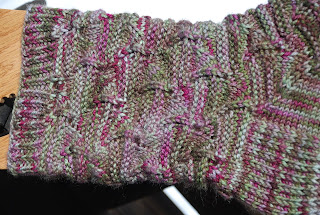 I didn't make any modifications.  As is true for me with most patterns by Cookie A, it just wasn't necessary!

So with a couple projects finished, I got sidetracked by the many, many patterns in my queue and decided that I really wanted a new sweater for spring.  I picked out a few that interested right now and went to Spinning Yarns to see what yarns they had in stock that would work with the patterns I picked out.  I decided on Que Sera and am using the suggested yarn, Blue Sky Alpaca's Organic Cotton.  My swatch was perfect with the suggested needle size, so I cast on the first sleeve Wednesday. 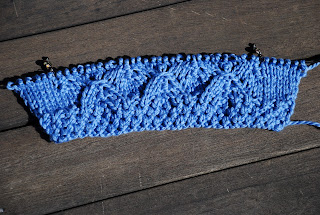 I also was itching to start a new sock and decided on Clandestine, which is the pattern for March in the Knit Sock Love KAL group on Ravelry.  It just so happened that I had bought Lorna's Laces Shepherd Sock in Cookie's Deep Dark Secret at Stitches East in October 2009 intending to knit this pattern with it.  I knew I had it, but I had to dig down a bit in my sock yarn bin to find it :-) 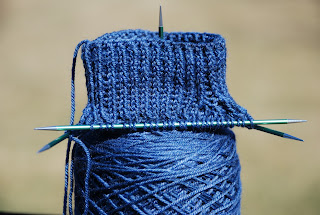 So how does all of this affect my personal Stash Down goal for this year?  Honestly, I'm doing ok.  I've destashed a few skeins from my stash so that helps too, but overall, even with club yarns coming in and the new yarn I bought last week, I'm still down 506 yards!
Posted by dianne at 8:28 PM