I joined a new Mystery Sock KAL in the Dragonfly Fibers group this weekend.  The design is a collaboration between Turtlegirl76 and Rosi G.  I wasn't going to join because it was suggested that lighter colors would be better to show the pattern and all I had in my stash was a skein of Djinni in Arctic Pearl and I thought it may be too dark. When I made that comment on Cristi's blog Friday, I got an email back from her that she thought this color would look awesome and that I should DOOOO IT!!!! LOL That's about all the encouragement it took.  I've been anxious to try this yarn since I bought it at Sock Summit 11, so I would it up yesterday and cast on in the afternoon.  It didn't take long at all to get through clue #1!  This first picture is a better representation of the color, and I think Cristi was right.  It does look great! 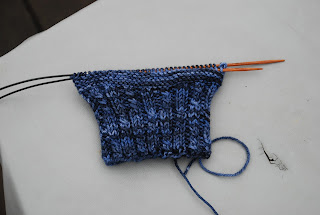 This picture shows the design a little better. 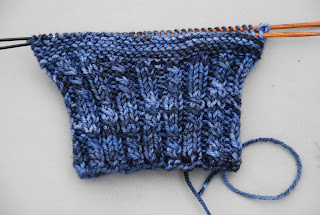 Clue #2 has been released so I'll be moving on to that today or tomorrow.

I'm also using the new Knitter's Pride needle for this sock.  They've gotten great reviews in many places, but I'm not sold on them.  The cable is really nice for magic loop.  It has plenty of flex but it's not too floppy.  The needle itself has a soft feel and it's quite rigid. The tips are a little too blunt though for my taste and the join is not quite as smooth as other brands I've used.  For $8 though, it's a decent buy.  I'd like to try the metal version too.  If I see them at my LYS I'm sure I'll pick them up and give them a try.
Posted by dianne at 8:32 AM