Last weekend we went to Alabama to visit my middle son, Justin.  We had a fantastic time!  We brought our youngest son, Chandler, with us too.  He is a junior in high school and has no idea what he wants to do for college, so we thought this would be the perfect opportunity to do a school visit.  It gave him an idea as to what a big Division 1 school, far from home, would be like.  So we started our weekend with an official school tour Friday morning.  (Typical teenager, can't do anything without his phone :-)) 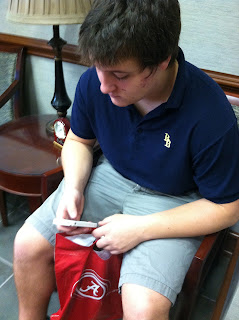 Then we headed over to Justin's apartment to meet up with him.  As it turned out, all 3 of the boys that he lives and a few other kids from the waterski team had their families visiting last weekend too! The boys decided to have a party so everybody could meet.

Here's a little glimpse of his apartment.  I don't know about you, but the places I lived in as a student were no where near as nice as this!  He lives in a 4 bedroom/4 bathroom townhouse, fully applianced and furnished including a washer & dryer with utilities included to a capped amount.  It is off-campus housing that caters to students and very common in Tuscaloosa.  They also have a clubhouse with a pool, hot tub, pool tables, movie theater, fitness center, etc.  Amazing. 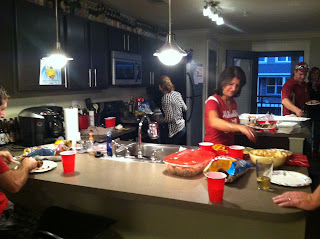 Anyway, it didn't take much encouragement for the moms to jump into action and start throwing some food together.  The dads manned the grills, and supervised the keg and cigars.  One set of parents came prepared to make margaritas.  After dinner, there was a rousing game of beer pong with father/son teams.  It was pretty hilarious and probably not all that different from a regular game weekend :-) 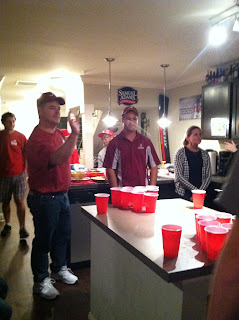 Saturday was Game Day! We headed over to the Quad to enjoy the festivities.  I have never seen anything like it!  EZ-Up tents were as far as the eye could see and they were fully decked out. Lots of food, tables decorated with tablecloths and flowers, flat screen TV's playing all the pre-game stuff, and if you can imagine it it was probably there! 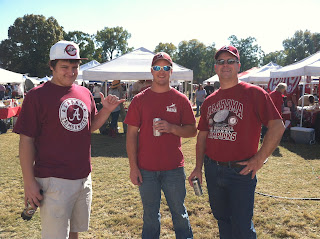 The game was a lot of fun.  It was the first time that Alabama and Texas A&M had met since A&M joined the SEC Conference.  Sadly, UA lost, but it was a fun game to watch.  I really enjoyed the marching bands. This is the A&M band, who happened to be staying at the same hotel we were at. 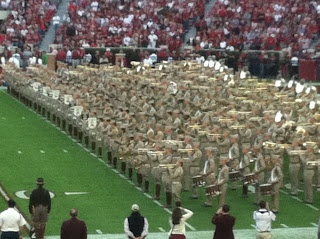 And the UA band.  It's a little hard to make out, but they spelled out USA and played music to honor each of the branches of our military. 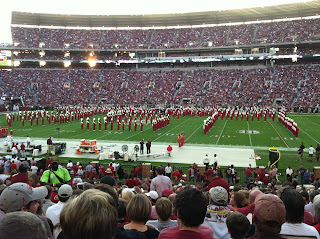 Here we are enjoying the game. We had great seats on the 30 yd line, 27 rows up on the visitor side. 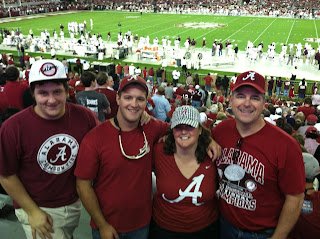 Before the game, the band percussion section did a show on the Quad.  Here is a small section of it. I hope you enjoy it!  As a former band geek myself, I loved it!


So that was our weekend!  I had a great time, but the best part about the entire weekend was seeing my son, in his element, doing his thing and enjoying his friends. I am a lucky mom that I got to see and experience that.  It makes it a little easier to have him so far from home when I know first hand how happy he is.
Posted by dianne at 5:50 PM