Have you ever had so many projects going at once, that you absolutely love, that you have a hard time deciding which one to work on when you do get a chance to sit down and knit?  That would be me right now!  This is what I have going right now….

First is my Toasty Twist Socks.  I have had this pattern in my queue for a long time.  It is one of the patterns for the Socks That Rawk! Ravelry group knit-a-long right now.  I decided to use my Rocktober color way for this pattern.  I like how they're coming out.  I do think though that the foot is a little looser than I usually like so I'm going to drop down a needle size for the rest of the foot. 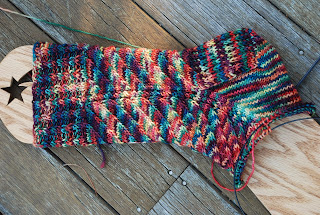 Next is the Vamp sock from the Cookie A club.  The yarn is Pagewood Farm Glacier Bay in the club color Cape Cod Cranberry which kind of makes them the perfect color to be knitting in November.  At least in New England :-)  I'm through a few repeats of the cable pattern now and it is making sense and becoming more intuitive for me.  They're already knitting quicker than they were the first night I worked on them, but it's cabling with twisted stitches on every row, so I need to pay attention to what I'm doing. 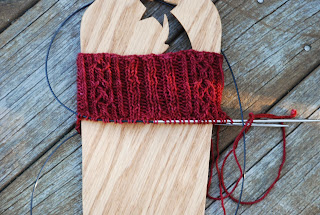 This is Acorn Trail which is the sweater I just couldn't wait to cast on.  I. Love. It!  It is really the only thing that I really want to be knitting right now.  But I want to continue to make progress on my other projects too, so I've been using this one as a reward.  It's knitting up pretty quickly. This is the back after only 3 evenings of knitting while watching tv. 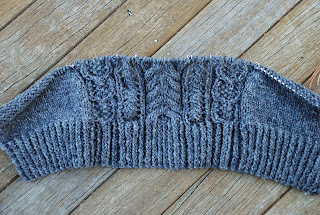 Rolling Rock.  What can I say?  Obviously I decided not to rip back the body and alternate skeins.  It may be a mistake, but in normal indoor lighting where I will primarily be wearing this, the color difference doesn't show.  So onward it is.  I'm on sleeve island with this one.  The only upside on this project is that I can knit away on the sleeves while I read and who doesn't love to multi-task like that? 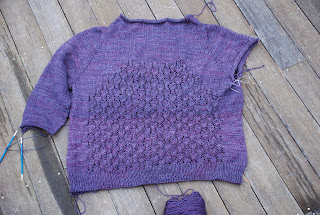