I finished a pair of socks this weekend from the Cookie A Sock Club.  Haleakala, inspired by the volcano in Maui, is the pattern I decided to do first.  The yarn that came for this installment is String Theory Caper and the club color is Solas, which is a green-blue.  I had a skin of Black Cherry in my stash that I thought would be a better fit for this pattern and would leave me the greenish color to use for the other pattern, Ripple Leaf. 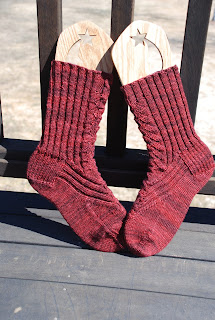 I couldn't be happier with the end result!  This was the first time I've used Caper, but it certainly won't be my last!  It is so soft, has great loft, and great stitch definition.  This pattern had two options with it as well for the instep.  Option 1 was to continue the lace pattern straight down the instep.  That is a beautiful sock too and I will probably make them one day.  I honestly had a hard time deciding which I liked better, but the deciding factor for me was how the decreasing is done with this option.  All the decreasing is done essentially on the instep as part of the design, which was a new technique for me. 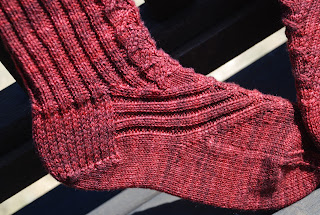 The effect I think is really striking!  So very clever and so very Cookie A! 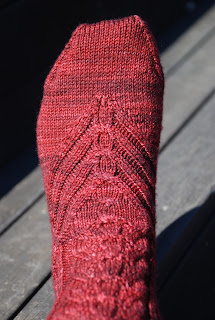 We have a beautiful sunny day today so I went outside to get some natural light pictures.  We've had a coooold wind for the last few days so we haven't stayed outside very long.  Poor Neal just wanted to play and kept bringing me his toy because in his world, that's what we do outside.  The third time I told him "Wait" he laid down with his toy and wouldn't even look at me. Poor Nealy.  He's ready for spring too! 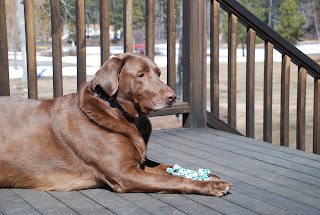 The next installment is due the first week of April which is next week!  I was so happy with the first one, I can't imagine what the next one will be like :-)
Posted by dianne at 4:15 PM