When a teenage boys asks

Sometimes it's great to be a fly on the wall.  My teenager likes to use Facebook to keep in touch with his friends.  Since he has played select/elite travel hockey for the last 5 seasons, and changed schools this year, his friends are truly scattered far and wide.  So, he loves Facebook for keeping up with everyone.  Being the good nosy mother I am, I pop onto his page from time to time just to keep an eye on things.  One day I stumbled upon a conversation he was having with a hockey buddy.  It went something like this...

Friend: Dude, remember those sick hats your mom made for us a couple years ago?
My kid: yeah
Friend: Do you think she would consider making me another one?
My kid: Probably.  I'll ask.

After a little back and forth, we decided on a new hat in his high school colors with an E on the back, because that is the other logo his school uses and he didn't know what his jersey number would be. 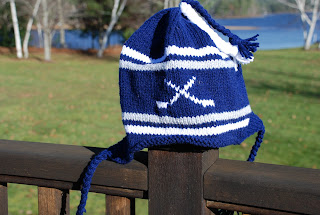 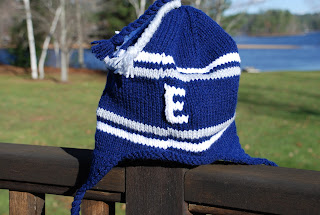 I mailed it off to him the end of last week.  High School try-outs began today around the state, so I hope this is a little good luck hat for him.  Good luck MAC! And to Chandler and all of his friends too. (There were a few nerves on display this morning when I dropped him at school with his gear.)

This is a personal pattern. My friend Kelly started it and I modified it a bit to make a little more sense to me.  I really should write it up, if for no other reason than to avoid the ripping and re-knitting I did tweaking it!
Posted by dianne at 8:14 PM