Adding to the Holiday Knits

I've been trying to stockpile some quick knits to use as gifts for my family members and a few close friends.  It may be the year of the hat this year!

I've finished two Turn a Square hats by Jared Flood.  I used Cascade 220 and Noro Silk Garden.  I love how the Noro has the slow striping color changes, but I did find it a little splitty.  I made these 2 hats from one skein of each and I have just enough left over for a third hat.  I decided it was time for a change though.  Maybe I'll make that third hat maybe I won't.  I did learn how to do the jog-less stripe with this pattern, which I can see using again in the future. 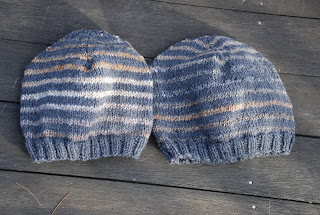 I also knit a Poet Society Tam by Kirsten Kapur/Through the Loops Designs.  I picked up the pattern while at Sock Summit this summer.  The yarn is Rios in the color Zarzamora which I go from my LYS, Spinning Yarns.  I love Rios!  Every time I've used it, I've decided that it's my new favorite yarn 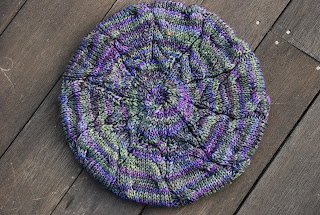 I decided to go with two buttons for the overlapping brim.  I really wanted one big funky button but I couldn't find one that was quite right.  But I do like these two buttons.  The color of them coordinates nicely with the yarn. 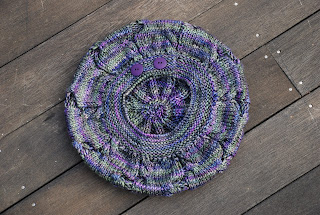 I don't know who these are going to be for yet.  I'm going to try a new idea this year.  I'm knitting projects that I just plain like and they're all going into a gift basket.  I'm hoping that by Christmas I will have enough FO's with enough variety that I will be able to let everyone pick for themselves what they would like to have.  We'll see how it works out.  It might be the best idea I ever had, or it could be the worst!
Posted by dianne at 8:51 PM