I'm happy to have these done, because it has gotten cold recently!  These are the first mittens I've ever finished, which is hard to believe.  Overall I'm happy with them, but if I make them again I would make them shorter.  The pattern says that they should be 5.5" from the end of the thumb gusset to the end.  Mine are 6" and 6.25" (more on that later), yet they are a good inch and a half longer than my hand. 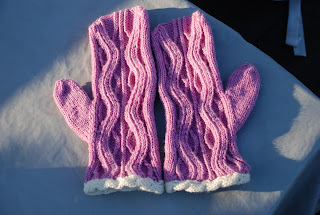 I learned something new with this pattern.  The cuff starts with a cabled i-cord.  I cord I can do, but I had never considered adding a cable to it.  It adds a nice bit of detail to the cuff!  The rest of the mitten is a free-flowing twisted stitch cable.  I didn't memorize the pattern, but it didn't take too long before it was intuitive as to what would happen next.  I like patterns like that. 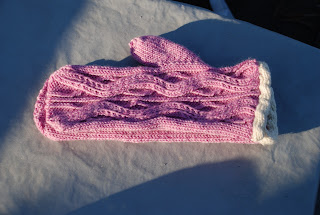 The second mitten ended up being longer than the first one.  I thought it was because I had changed needles midway through the second one.  I just had to try out my new Signature needles I got for Christmas :-)  It turns out though that the problem was that I started the decreases 3 rows earlier on the first mitten but forgot to make a note of it on my pattern :-(  I finished the second one in the waiting room at the hospital while my son was having surgery and I left the first mitten at home, so didn't have it handy to compare the two.  Overall though, enjoyable pattern and comfy finished mittens.