The Christmas gift knitting continues and I am thisclose to bagging my idea of knitting a enough small items to let everyone pick something.  I made a list of all my family members that I would want to include and realized I would need at least 16 finished pieces.  So far I have 6 hats, an infinity scarf, and 3 pairs of socks.  That's only 10 items.  I need a new plan.  When I figure it out, I'll be sure to let you know what it is!

But for now I still continue to knit in a delusional haze like I'm actually going to make it.  New on the needles this week is a Koolhaas hat.  I'm using Dream in Color Classy and the color is called Black Parade.  It's a very cool color with some blue and teal undertones.  Click on the picture to enlarge it and you'll be able to see it even better.  So I have two thoughts about this project right now.  1. - Thank goodness I learned how to cable without a cable needle because it is saving me a TON of time. 2 - Has Dream in Color updated their Classy?  I've used it before and liked it, but this skein????  Wow!  It is so nicely spun and smooth it's like a different yarn, in a good way! 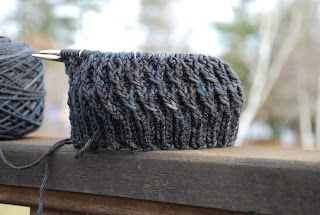 Here is my Clepsydra Mitten that I showed you last week.  This has been my car knitting because it's a nice light color so it's easier to work on in crappy light situations, which I seem to find myself in pretty regularly these days.  Great pattern and once I got going on it, it became quite intuitive for me, which is a plus for car knitting. 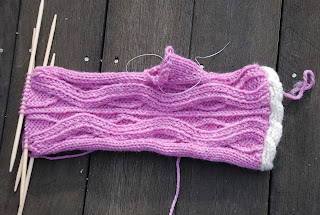 I think I have a row gauge issue though.  I've started the decreases for the top, but I'm already beyond the end of my longest finger.  I need to decided quickly whether I only do about 2 more decreases and have a blunter end, or keep going as written and have a bit of a floppy mitten. 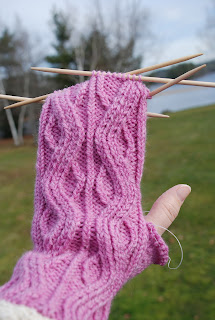 I'd love to hear your opinion, so please leave me a comment. Thanks!

PS- I got my November Rockin Sock Club kit yesterday.  Holy Moly, it's the best one this year!  And I thought that except for maybe January's kit, it was a spectacular year for this club.  Just don't ask me how many I've actually knit :-)  I'll show it to you next week so I don't spoil someone's surprise by accident.
Posted by dianne at 1:15 PM