I've been thinking about what I want to try to accomplish and I've decided to try to finish some of my WiP's.  So, for Team Blue Moon I plan to finish my Raven Swirl Socks, which I started in April 2010, 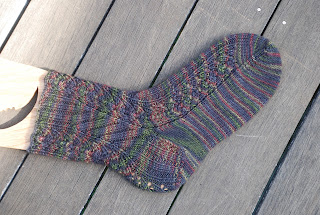 and my Queen of Beads socks that I started in January 2010. 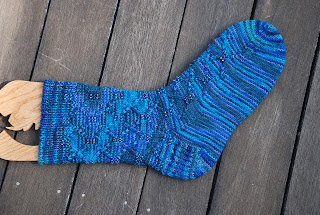 Yes, that's right.  Both of these projects are over two years old!  It's definitely time they got finished!  I'm going to triple dip with these also for the 26 Pair Plunge and the SKA "Can I finish more socks than Christine, aka Mapleweave, in August" fun challenge.

My LYS, Spinning Yarns, is having a team this year too.  I have a few WiP's from there too and I have decided to try to finish my Que Sera sweater.  In my mind I thought I had more done than I do.  So far I have 1/2 of a sleeve complete, so basically I'm going to try to knit an entire sweater! 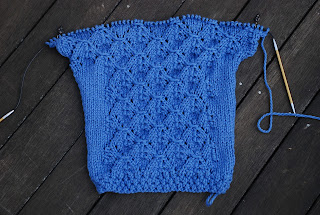 If I finish all three of these projects, I do have some more WiP's that I could tackle for team Spinning Yarns.  I also have a bunch of sock club kits that I could start for Team Blue Moon too.

I'll be "training" before the Opening Ceremony by winding the rest of the yarn for the sweater and by stringing the beads for the Queen of Beads sock.

I've also been poking along on a sock.  The pattern is Jubilee by Cookie A.  It is one of the patterns from the June 2011 club and the pattern is now available for purchase.  I'm using some Hazel Knits from my stash for it. 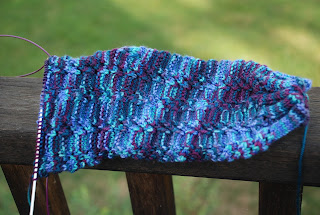 Are you participating in the Ravellenic Games too?  Tell me what team you're on!
Posted by dianne at 9:02 PM