Everything Old is New Again

Do you know the expression "Everything Old is New Again?"  That's how I feel right now.  My friend  Christine started a challenge a of couple summers ago to finish as many pairs of socks as she could in August.  She also challenged her fellow Sock Knitters Anonymous friends to see if anyone could finish more than she could.  I've followed along for the last couple of summers but didn't really participate.  The only rule, if you will, this year is that the socks have to have been started before July 1, 2012.  It's time to finish up all those WiP's that I have kicking around!

I finished this pair today.  These are the Queen of Beads socks.  I think this was the Rockin Sock Club kit from January 2009 and I started these in January of 2010!  This is the second pair that I've finished in August. 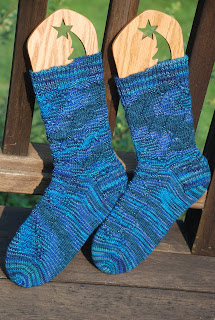 Which project should I tackle next? 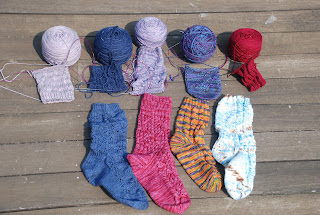 The ones on needles are all first socks, so I'm thinking that I should cast on the mate for one of the single socks.  Too many choices!  I do think that I'm going to frog the top left sock though.  I wasn't sure that I liked the yarn/pattern combination when I started it.  It's been hibernating for a little while now and I'm still ambivalent about it.  Time to frog it.  What do you think?
Posted by dianne at 5:42 PM