I am proud to say that I have been called to the Podium to collect my medal!  My first completed WiP for the WiP Wrestling Event is Raven Swirl Socks.  This was the Rockin Sock Club Kit from November 2009.  I cast it on in April 2010 and completed the first sock.  It was an orphan until I cast on it's mate during the Opening Ceremony.  It was a fast and fun knit!  I honestly don't know why I didn't finish the pair before now. 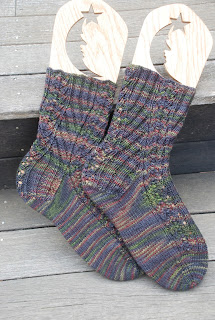 I'm also making progress on my sweater.  I finished the second sleeve and am casting on for the body now.  I don't know how much of the body I will get done, but I'm going to give it the old college try anyway! 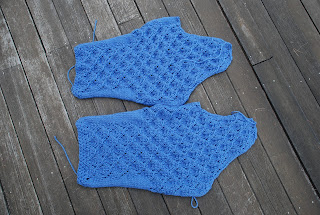 I still have the Queen of Beads sock that I can finish too.  I'll save that for when I need a break from the sweater.  Gotta go!  It's just about time for tonight's Olympic coverage to begin!
Posted by dianne at 7:49 PM