Winter in New England means it is time for hats.  I added several patterns of hats I'd like to make to my list this year.  There's no way I'll make them all, but it's nice to have a list of ideas to choose from.

I started this year with the Olympic Reindeer Hat.  It's a replica of the hat that Team USA wore for the Opening Ceremonies of the 2010 Winter Olympics.  I know that Ralph Lauren sold them, but I never saw one in a local store, so I decided to tackle this free pattern that was on Ravelry.  Colorwork is not my strongest skill, so I headed off to my LYS to take a clinic to help me with my tension and carrying of contrasting colors.  It was the BEST $15 I have ever spent on knitting. 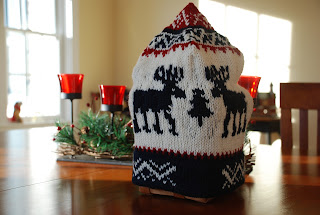 My carrying was not perfect, but I was pretty happy with it overall.  After completing the hat, there are a few things I would like to change about it.  First, it's a little tall.  I was hoping that a good wash and block might help that, but I don't think it did.  If I make this hat again I think I will take out a row or two of white above and below the moose/reindeer.  The tree also looks a little stumpy, so I would rechart that and make it a little taller.  There is room to move the reindeer to the outside to create space for taller tree.

I would also think about recharting the bottom border motif. Look at the center diamond on the bottom.  There's definitely a mistake in the chart.  It's where you begin the chart repeat for the second half of the hat.  I didn't notice it until I was well past it and decided not to rip back. 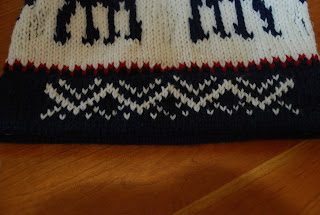 The next thing I would consider is how to avoid carrying the blue for such long distances between the antlers.  I did see another hat on ravelry that added some snowflakes.  Genius!  They filled some of the white space and cut down on the carrying. 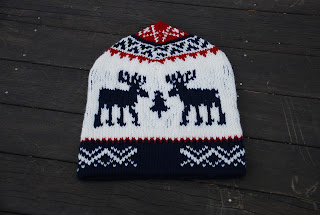 I still need to add some braids to the top after it dries.  Overall, it was a great knit and it fits everyone in my family well.  This one may be gifted and I'll knit another with the modifications for myself.  I used Cascade 220 which made it an affordable knit, especially since I have plenty of white and red left for a second hat.  I may have to pick up another skein of navy to complete another hat.  I just have to weigh what's left to decide for sure.